“peut-être n’y a-t-il que le beau qui nous humanise”
～Alain, Propos sur l’esthétique, 1923
We live only to discover beauty. All else is a form of waiting.
There is a space between man's imagination and man's attainment that may only be traversed by his longing.
～Kahlil Gibran
昔者莊周夢為胡蝶，栩栩然胡蝶也。自喻適志與！不知周也。俄然覺，則蘧蘧然周也。不知周之夢為胡蝶與？胡蝶之夢為周與？周與胡蝶，則必有分矣。此之謂物化。
《莊周夢蝶》

Our hands imbibe like roots, so I place them on what is beautiful in this world. And I fold them in prayer, and they draw from the heavens, light.
～St. Francis of Assisi

Poesis
a place of music, and poetry
"That pleasure which is at once the most pure, the most elevating and the most intense, is derived, I maintain, from the contemplation of the beautiful." ～Edgar Allan Poe / "Understood in its metaphysical sense, Beauty is one of the manifestations of the Absolute Being. Emanating from the harmonious rays of the Divine plan, it crosses the intellectual plane to shine once again across the natural plane, where it darkens into matter." ～Jean Delville 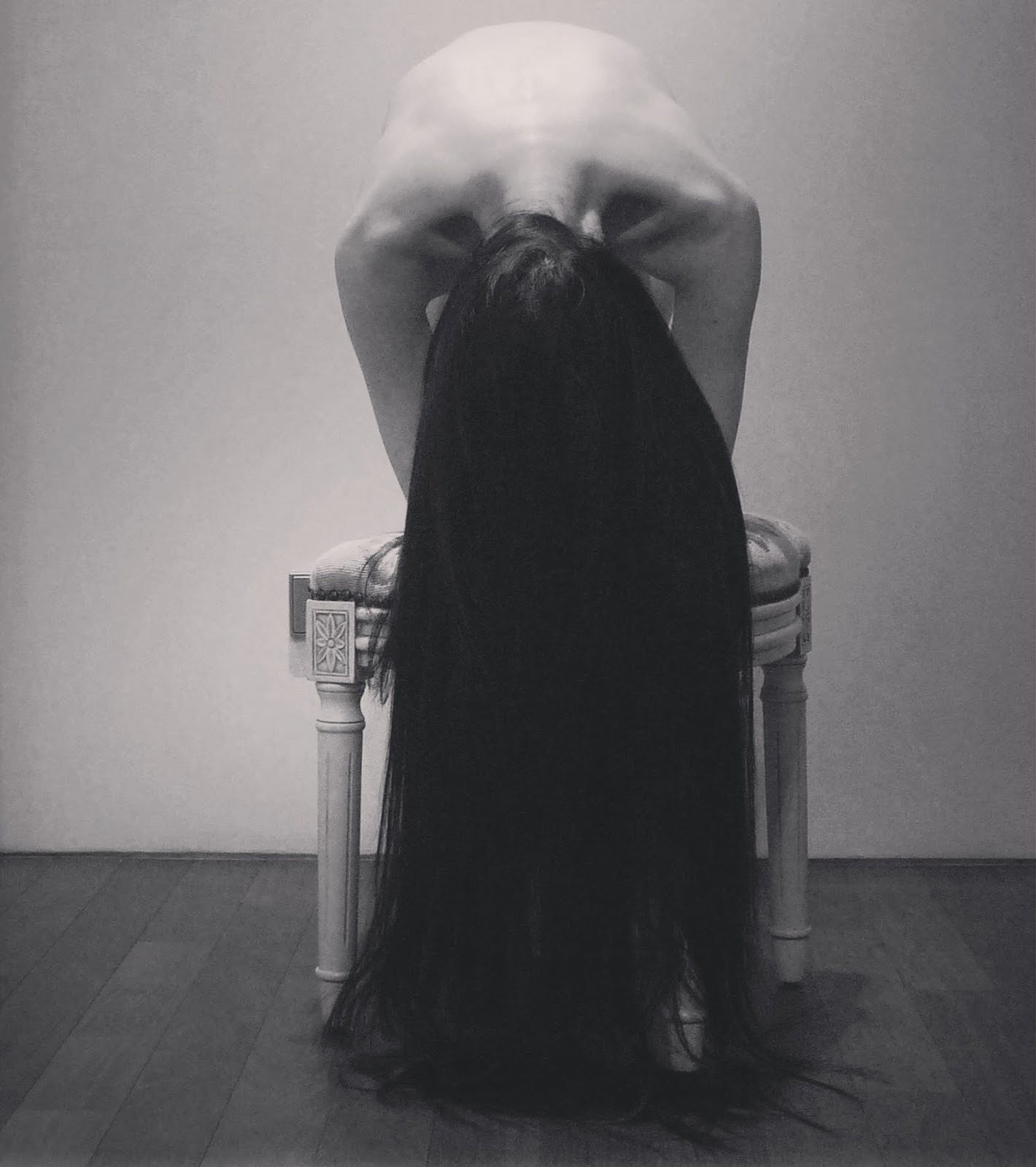 Virtual Places of My Heart

To feel most beautifully alive means to be reading something beautiful, ready always to apprehend in the flow of language the sudden flash of poetry.
～G. Bachelard

I would define the poetic effect as the capacity that a text displays for continuing to generate different readings, without ever being completely consumed.
～Umberto Eco
Innate in nearly every artistic nature is a wanton, treacherous penchant for accepting injustice when it creates beauty and showing sympathy for and paying homage to aristocratic privilege.
～Thomas Mann

Stay, little ounce, here in/ Fleece and leaf with me, in the evermore/ Where swans trembled in the lake around our bed of hay and morning/ Came each morning like a felt cloak billowing/ Across the most pale day. It was the color of a steeple disappearing/ In an old Venetian sky. (...)
Would they take/ You now from me, like Leonardo's sleeve disappearing in/ The air. And when I woke I could not wake/ You, little sphinx, I could not keep you here with me./ Anywhere, I could not bear to let you go. Stay here/ In our clouded bed of wind and timothy with me./ Lie here with me in snow.
~For a Snow Leopard in October, Lucie Brock-Broido

Here lies a rose, of which all kings may be jealous. 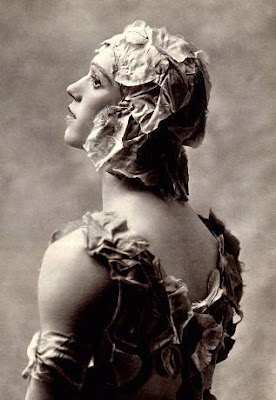 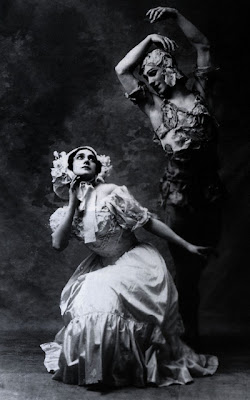 
Open your closed eyelid
Which is gently brushed by a virginal dream!
I am the ghost of the rose
That you wore last night at the ball.
You took me when I was still sprinkled with pearls
Of silvery tears from the watering-can,
And, among the sparkling festivities,
You carried me the entire night.

O you, who caused my death:
Without the power to chase it away,
You will be visited every night by my ghost,
Which will dance at your bedside.
But fear nothing; I demand
Neither Mass nor De Profundis;
This mild perfume is my soul,
And I've come from Paradise.

My destiny is worthy of envy;
And to have a fate so fine,
More than one would give his life
For on your breast I have my tomb,
And on the alabaster where I rest,
A poet with a kiss
Wrote: "Here lies a rose,
Of which all kings may be jealous."

Translation from French to English copyright © by Emily Ezust 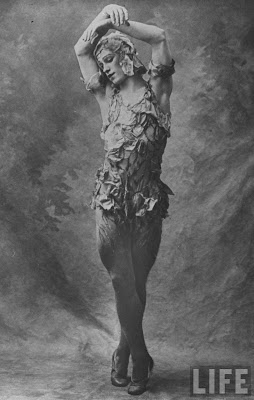 Nijinsky as the Rose Spirit photographed by E. O. Hoppe in 1911.

Le Spectre de la Rose is amongst the most famous repertoire of the Ballets Russes. Based on a poem by Théophile Gautier and set to the music taken from Carl Maria von Weber's short piece Invitation to the Dance, it was choreographed by Michel Fokine with costume and set designs by Léon Bakst (to see more marvellous art of Léon Bakst, click here). The premiere of Le Spectre de la Rose took place on April 19, 1911 by the Ballets Russes in the Théâtre de Monte Carlo, with Vaslav Nijinsky as the Rose and Tamara Karsavina as the Girl.

Le Spectre de la Rose is such a magnificent piece and yet extremely difficult to execute well. The role of the Rose Spirit demands both technical brilliance and, more importantly in my opinion, a subtle/gentle sense of masculinity in the embodiment of a beautiful rose. In English National Ballet's celebratory performance of the Ballets Russes centenary last week, I found the dancer of the Rose Spirit to be too effeminate, albeit exhibiting near-flawless techniques. 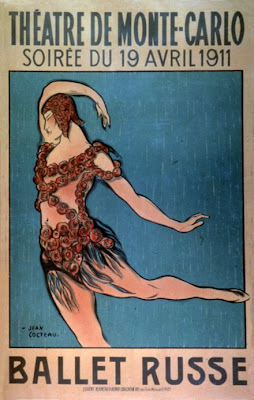 A precious video clip of Mikhail Baryshnikov and Dame Margot Fonteyn performing Le Spectre de la Rose at the Monte Carlo Opera House in 1979. Fonteyn was 60 years of age (and still so gorgeous and extraordinary!) whilst Baryshnikov was 31.


This is my favourite version in terms of the Rose Spirit solo. I have never seen another Rose Spirit quite like Misha (unfortunately there is no surviving film footage of Nijinsky's original Le Spectre de la Rose). Just like his interpretation of Balanchine's Tchaikovsky Pas de Deux, every movement of Misha is a painting. I highly recommend this DVD where you can see the most stunning performance of Tchaikovsky Pas de Deux (and a lot more!). Misha is also my favourite Albrecht (see here, here & here). Being an unparallelled virtuoso in the classical ballet world, I love how he strove to bring out the essence of each character he danced, and at the very same time conveyed his passionate love for this art in an elegant and effortless way. I can never forget seeing him as Basil (or Basilio, the title role in Don Quixote) in American Ballet Theatre's production, dancing that infamous variation with those vertiginous grand pirouettes at the end - how beautifully he executed the piece and how infectious his big smile was. It is as though he was having the greatest time of his life! Ah the thrill of it all... Baryshnikov is truly a gem. I admire that he never ceases to reinvent himself and express his love as well as creativity in different artistic media (photography, music composition, and of course, dance).

I fell in love with Les Sylphides after seeing English National Ballet's faithful production and interpretation last week - Diaghilev and the Ballets Russes lived again. Here is the waltz from Les Sylphides danced by Mikhail Baryshnikov and Marianna Tcherkassky (the Girl in Le Spectre de la Rose, second clip above).

Thank you so much! Shame that some of the great video clips were removed... Will see if they have been re-uploaded by someone else and update.